Dubai, 28 June 2012: Nearly two years after its joint launch in Lebanon by the American University of Beirut and Nestlé, with the support of the Lebanese Ministry of Education, the “Nestlé Healthy Kids Global Program – Ajyal Salima” has so far reached 2,389 students in 20 public and 8 private schools – with results showing significant enhancement in participating children’s understanding and adoption of healthy eating and lifestyle habits. The Program is set to roll out in other countries of the region in the future, as it also expands within Lebanon.

The Nestlé Healthy Kids Global Program aims to raise nutrition, health and wellness awareness of school age children around the world. It involves 12 educational sessions per round, including interactive learning and hands-on activities on nutrition, healthy eating and physical activity; as well as questionnaires developed to track improvement of children from pre to post interventions. 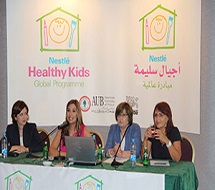 Key highlights of preliminary analysis covering children’s pre and post Program grasp of key healthy eating and lifestyle facts include students achieving more than 50% higher scores on knowledge tests; a 40% hike to an impressive 100% of children understanding that “water is the best fluid for my body,” and a whopping increase of children who recognize the need to eat five or more fruits and vegetables a day from slightly over 10% before to nearly 70% after.

In terms of dietary habits improvements, notable changes were a drop in chips purchases from 65% to 42%; drop in soft drinks purchases from 28% to 19%; students who were consuming chips on daily basis decreased their intake to “not every day;” and students reported an increase in their fruits, salads & cooked vegetables consumption with those who were eating once a day reported eating twice a day after the program.

“This Program is a crucial first step in a much required effort by all concerned parties to tackle childhood nutrition and exercise habits because they signal exploding health epidemics in the future,” said its Director Dr. Nahla Hwalla, AUB’s Faculty of Agriculture & Food Sciences Dean.

“International studies show that 30% of obese preschoolers, 40% of obese school children, and 80% of obese teenagers become obese adults,” she added. “This while our latest local data from 2009 tells us that 18.6% of Lebanese boys and 8.6% of Lebanese girls are now obese, up from 10.2% and 4.5% respectively in 1997 – nearly doubling the obesity rate among our children from 7% to 13.7% during the period.” 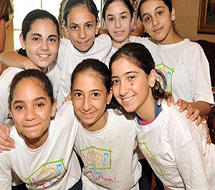 “We know that increased obesity rates today mean higher rates of non-communicable diseases tomorrow,” said Fady Yarak, Director General of the Lebanese Ministry of Education and Higher Education. ”We support and help implement this Program because we also know that school is the vital stage for promoting healthy eating habits and obesity prevention, and that education is the most powerful tool for ensuring children understand the positive reflection of nutrition and physical activity on their health.”

More alarming statistics include the fact that non-communicable diseases are expected to afflict 69% of people in developing countries by 2020, up from 47% in 1990 and 56% in 2000.

“In light of all these realities, Nestlé Healthy Kids Global Program – Ajyal Salima aims to not only teach 9-11 year-olds what foods and exercise habits are good for them, but also how to incorporate them into their daily lives,” said Nestlé Creating Shared Value Manager Karine Antoniades Turk. 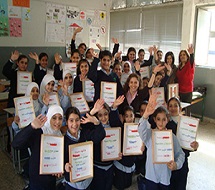 “Actual lifestyle changes did not yet shift significantly, though we anticipate more palpable results in coming years,” Habib said, attributing this to “the short three-month duration of each round which is not enough to induce and detect measurable behaviour changes; easier access to less nutritious snacks and foods within school premises; limited parental interest and engagement in children’s nutritional and exercise routines; and generally low availability of exercise facilities.”

In conclusion: “key next steps,” Hwalla said, “should include early identification and management of children at risk as that allows for the reversal of cardiovascular damage; multi-component interventions addressing pediatric obesity; and leveraging the Nestlé Healthy Kids Global Program – Ajyal Salima to tackle multi-sectoral prevention initiatives requiring leadership and coordination among the government, private sector and NGOs.”

The “Nestlé Healthy Kids Global Program” is a Nestlé Creating Shared Value initiative to promote healthy living among children. Launched globally in 2009, this program runs in partnership with governments, academia, and NGOs in over 60 countries around the world reaching to date around six million children.

1. Hwalla N. et al. Prevalence and trends of overweight and obesity in adults, children and adolescents in Lebanon, 2008-2009 (unpublished)