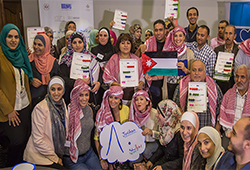 Jordan has become the world’s 80th country to introduce the Nestlé Healthy Kids Program, following an agreement with the Royal Health Awareness Society (RHAS) to implement the “Ajyal Salima” nutrition education curriculum in a number of schools as a pilot project, alongside other standards related to RHAS’ Healthy Schools program.

“RHAS considers Ajyal Salima to be a practical and effective educational approach that fits into our priorities and programs in Jordan shedding light on the importance of nutrition and physical activity to our school children,” said Hanin Odeh, RHAS Director General. “RHAS targets school children through implementing programs that aim to enhance and develop healthy environments in schools which reflect positively on their physical, social and educational evolution.”

“We are thrilled that the 80th country milestone for the Nestlé Healthy Kids Program, which was committed by 2015 in our global Nestlé in Society report, has been reached thanks to a new partnership in the Middle East, where Ajyal Salima has been thriving and proving its efficacy over the past five years.”

With the help of the country’s Education and Health ministries (school health unit), RHAS has adapted the American University of Beirut (AUB)-developed Ajyal Salima curriculum to the specific requirements of Jordanian children.

Its introduction in the Hashemite Kingdom began with “Train the Trainers” workshops, designed and delivered by AUB to equip Ministry of Education teachers and health educators to run the Program successfully in 4th and 5th grades. Roll out will initially cover 10 public schools over one academic year in Madaba Governorate, reaching around 1,200 students.

Based on the global Program launched in 2009 and now in 80 countries with Jordan joining the family, the regional Ajyal Salima curriculum was first developed by AUB and launched in Lebanon in 2010. It has since been scientifically* demonstrated to lead nine-eleven year-olds to have better eating habits and significantly increase their general nutrition awareness. Implementation in Dubai began in 2012, and in Saudi Arabia in 2014.

RHAS was established in 2005 under the direction of Her Majesty Queen Rania Al Abdullah to promote health and empower Jordanians to adopt healthy lifestyles and behaviors. RHAS' community-based projects are implemented in accordance with the needs of communities and revolve around national health priorities.