Beirut, 19 November 2014: The Lebanese Ministry of Education and Higher Education is establishing another first in the Middle East by incorporating nutrition awareness into its Health Education Unit’s curriculum through the full adoption of the “Nestlé Healthy Kids Program – Ajyal Salima,” demonstrated in an American University of Beirut (AUB) study1 to lead nine-eleven year-olds to have better eating habits and increase their general nutrition awareness threefold.

Since its 2010 launch by AUB and Nestlé with the support of the Lebanese Ministry of Education and Higher Education, Nestlé Healthy Kids – Ajyal Salima has reached more than 140 schools and 11,000 students across Lebanon. The Ministry is now expanding dissemination, and monitoring implementation in all governorates thanks to its extensive School Health Unit network of educators nationwide. 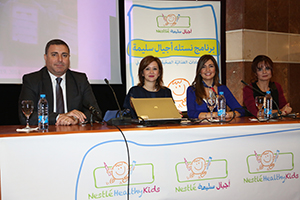 “Ajyal Salima has proved to be a great success over the four years we’ve been implementing it in our schools with expert support by a team from AUB, and we are now more than confident it is a beneficial tool to include in the health education unit’s national programs to help sustainably combat growing childhood obesity rates and improve nutrition awareness,” said Fady Yarak, Director General of Education at the Lebanese Ministry of Education & Higher Education.

“We couldn’t be happier that the Program scientifically-developed3 by AUB for the Middle East as “Kanz Al-Soha” is now becoming an integrated part of Lebanon’s school health education,” added Dr. Nahla Hwalla, AUB’s Faculty of Agriculture & Food Sciences Dean. “This is a crucial step in improving public health among the general population of the country.”

“Nestlé is globally committed to nurturing healthier generations and creating shared value for communities through long-term partnerships with local authorities and experts,” said Nestlé Healthy Kids Middle East Program Manager Karine Antoniades Turk. “The Nestlé Healthy Kids Program – Ajyal Salima has been one of our main collaborative initiatives in the Middle East, which we have also rolled out in Dubai in 2012 and in Saudi Arabia earlier this year in partnership with local governments and other entities.”

“Train the Trainers” workshops designed by AUB have been equipping teachers and health educators to run the Program successfully in 4th and 5th grades.

“Childhood obesity is estimated to have doubled2 in Lebanon in the past decade,” concluded Sonia Najem, Director of the Health Education Unit at the Lebanese Ministry of Education and Higher Education. “We are now solidifying the implementation of Ajyal Salima as well as other programs because we know that preventive measures should start early in life and that schools are an important environment to promote healthy behaviors.”

Part of the Global Program, the “Ajyal Salima” curriculum was developed by the American University of Beirut3 to answer specifically to Middle Eastern community issues and address children nutritional habits and requirements. It encompasses three components that include classroom educational sessions consisting of interactive learning and hands-on activities, healthy eating, and physical activity; parental involvement; and interventions at the school shop/canteen level.