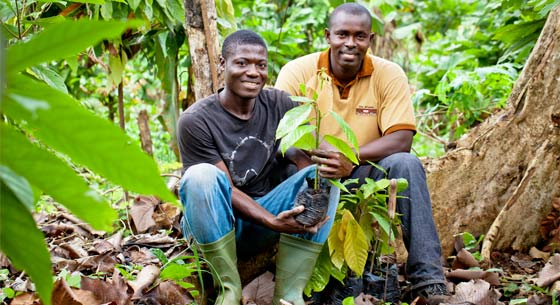 Nestlé and its partners will involve communities in Côte d’Ivoire in a new effort to prevent the use of child labour in cocoa-growing areas by raising awareness and training people to identify children at risk, and to intervene where there is a problem.

The initiative is part of an action plan drawn up by Nestlé in response to a report on the company’s cocoa supply chain in the West African country by the Fair Labor Association (FLA).

It builds upon existing efforts to develop a more sustainable cocoa supply through the Nestlé Cocoa Plan.

“The use of child labour in our cocoa supply chain goes against everything we stand for. As the FLA report makes clear, no company sourcing cocoa from Côte d’Ivoire can guarantee that it doesn’t happen, but what we can say is that tackling child labour is a top priority for our company,” said José Lopez, Nestlé’s Executive Vice President for Operations.

The FLA concluded that, with some adjustments and improvements, the Nestlé Cocoa Plan can become a well-rounded developmental programme.

The plan, along with the other initiatives Nestlé participates in, provides the building blocks for a more robust and deep reaching effort, the FLA experts say in their report

They found that child labour is a reality on cocoa farms in Côte d’Ivoire and has its roots in a combination of factors including poverty and the socio-economic situation of the farmers and their families.

The report says an effective strategy to eliminate the problem must start by tackling the attitudes and perceptions of those in the cocoa supply chain and the communities in which they live.

Nestlé does not own or operate farms in Côte d’Ivoire, but is well positioned to make a positive impact on the livelihoods of workers in the cocoa supply chain, the FLA says, due to its leverage with its suppliers and the volume of cocoa beans it procures.

The FLA made 11 recommendations to Nestlé, all of which the company fully supports and is acting upon, in some cases in collaboration with its partners.

Nestlé is committed to the eradication of child labour in its cocoa supply chain.

Measures needed to tackle child labour are prioritised, including improvements to the company’s supplier code.

Nestlé wants suppliers in Côte d’Ivoire to ensure that the farmers growing cocoa for the company are fully aware of the obligations contained in the code.

The company will work more closely with its suppliers, its certification partners and other bodies to ensure those working throughout the cocoa supply chain receive better training on the nature of the child labour problem and how to address it.


The use of child labour in our cocoa supply chain goes against everything we stand for. As the FLA report makes clear, no company sourcing cocoa from Côte d’Ivoire can guarantee that it doesn’t happen, but what we can say is that tackling child labour is a top priority for our company. José Lopez, Nestlé’s Executive Vice President for Operations.

Nestlé believes that working with local communities to create a robust monitoring and remedy scheme will produce the greatest returns as it seeks to improve working conditions.

The company’s management in Côte d’Ivoire will oversee the new child labour initiatives and co-ordinate efforts with partners, suppliers and the authorities.

Nestlé will work with its partner, the International Cocoa Initiative, a foundation that works with the cocoa industry, civil society and trade unions, to set up the new monitoring and remedy scheme.

It will be piloted in 40 communities covered by 2 co-operatives of cocoa farms during this year’s cocoa harvest.

The plan is to scale it up to include 30 more co-operatives by 2016, involving around 600 communities.

The FLA will evaluate how successful this model of child labour monitoring and prevention is over the next three years.

Strengthening and scaling up the Nestlé Cocoa Plan

Nestlé welcomes the FLA’s finding that its ‘Cocoa Plan’ lays the foundations for strengthening and mounting further efforts to achieve its ambition of cocoa supply chains free from child labour.

The Nestlé Cocoa Plan aims to enable farmers to run profitable farms, to eliminate the use of child labour on those farms and to ensure a sustainable supply of cocoa.

It is designed to create value throughout the supply chain, particularly for the farmers and their families, but also for the company’s shareholders, an approach Nestlé calls Creating Shared Value.

The company believes that improving and scaling up the ‘Nestlé Cocoa Plan’ will help ensure there is a sustainable flow of cocoa to Nestlé from Côte d’Ivoire.

Nestlé has pledged to source 10% of its global cocoa supply this year from farmers covered by the Nestlé Cocoa Plan.

More than 6,000 cocoa farmers in Côte d’Ivoire have received training in 2012 as part of the plan.

Over 800,000 better quality cocoa plants have been distributed to them.

By 2015 Nestlé aims to train a further 24,000 farmers in the country, and deliver a further three million plantlets.

In March the company opened the first school it has built for a Nestlé Cocoa Plan co-operative.

Over the next four years, Nestlé, with its partner the World Cocoa Foundation, plans to build or refurbish 40 schools for other communities that have been identified as in need.

WORKING WITH THE FLA: Zero tolerance of child labour in Nestlé’s supply chain.

In its action plan Nestlé sets out further measures that will be needed in the years ahead. The company and the FLA will publish annual updates on the progress made.

Nestlé is committed to transparency throughout this process.

It is the first company in the food industry to join the FLA, a non-profit multi-stakeholder initiative that works with major companies to improve working conditions in their supply chains.

Nestlé asked the FLA to map its cocoa supply chain in Côte d’Ivoire. It has pledged to work with the FLA over the long term to address the issues raised in its report.

The current action plan is just the first step in a long process.

The complexity of child labour in the cocoa supply chain means solving the problem will take years.

Nestlé works with partners UTZ Certified and Fairtrade to certify the cocoa produced by Nestlé Cocoa Plan co-operatives as part of its efforts to promote sustainability and tackle labour problems.

Nestlé will continue to work with its certification partners to strengthen the role of certification in the elimination of child labour.

The company will also work with its suppliers on new ways to reduce the risk of child labour on farms not yet covered by the Nestlé Cocoa Plan, as recommended by the FLA report.

Working with the government

The company shares the FLA’s view, set out in its report, that individually a company cannot solve the problems of labour standards in the cocoa sector in Côte d’Ivoire.

The role of government and other stakeholders is critical.

For this reason Nestlé is fully supportive of the Ivorian government’s national action plan directed against child trafficking, child exploitation and child labour.

“We welcome this initiative by the Ivorian government,” said José Lopez. “Our approach is fully aligned with theirs, and we look forward to co-operating with them to achieve our common goals.”