Dubai, 5 November 2012: The Middle East’s arcenciel, Paraguay’s “Fundación Paraguaya de Cooperación y Desarrollo,” and the UK’s Excellent Development have won the 2012 Nestlé Creating Shared Value (CSV) Prize – sharing more than $500,000 and triumphing among 634 candidates from 76 countries which vied for the international acknowledgement of their programs and the Prize’s related funds. 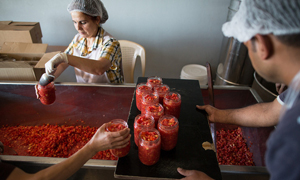 “It’s simply wonderful for arcenciel to have one of our key programs recognized by such a prestigious international prize, and we are confident this will not only boost our efforts in sustainable agriculture and fair trade but also reflect on our ongoing work in other areas of environmental protection, human rights, youth employment, support for the disabled and more,” said Pierre Issa, designer of the Wataneh initiative and founding member of arcenciel which operates in Lebanon, Jordan, Syria, Egypt and France.

The Nestlé Prize in Creating Shared Value is awarded every other year to support an innovative project, an inclusive business or a social enterprise in the area of nutrition, water, or rural development.

“We at Nestlé Middle East are extremely proud to have a candidate from our region selected for this global award which is open to individuals, not-for-profit organisations, enterprises and academic institutions from around the world,” said Nestlé Middle East Chairman and CEO Yves Manghardt. “The next Prize will be awarded during the 2014 CSV Forum, and the nomination period is running until 31 March 2013.” governmental and inter-governmental organisations,

arcenciel won for Wataneh, a program launched in 2009 to improve the sustainability and competitiveness of Lebanese agriculture. It supports and promotes the production, marketing and consumption of a diversity of fresh and processed products produced in an environmentally friendly, socially responsible and economically viable way.

More on the Wataneh program

The program helps farmers and owners of small and medium food processing units increase the quantity and quality of food production to respond to local market demand. This is achieved through seven agriculture service centers, where Wataneh engineers provide farmers and food processors with solutions to help them face agricultural challenges that include such practices as upgrading systems, extending services, supporting new irrigation methods, quality control, and linking farmers to markets and access to credit. Then, part of the produce is collected and transported to Wataneh purchasing and distribution units where it is controlled, graded and sorted. Products are distributed within a network of grocery shops at fair prices.

Results and impact in the community

Wataneh has so far worked with 152 farmers helping them cultivate approximately 750 hectares and produce 20,000 tons of fresh fruits and vegetables a year. This has led to an increase in the variety of crops produced, reduction in use of chemicals, increase in the use of environmentally friendly techniques as well as in farmers’ income. Wataneh has also supported twenty small and medium food processors, mainly women cooperatives and small food industries, to produce approximately 200 tons of tradition processed food a year. This has led to an increase in production as well as income while improving manufacturing practices and quality. The organization works with thirty grocery shops, selling approximately 3,000 tons of fruits and vegetables and ten tons of processed food a years to around 7,000 customers. 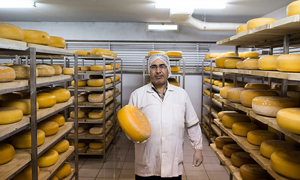 arcenciel was founded in Lebanon in 1985 with the overall mission of participating in sustainable development. It runs seven programs in agriculture, employment, environment, health, rehabilitation, social and youth issues. The NGO counts over 1,000 volunteers among its team in the Middle East and France. More information can be found on www.arcenciel.org, or on Facebook: arcenciel.aec.

More on Nestlé Creating Shared Value in the Middle East

Creating Shared Value is the Nestlé fundamental way of doing business. Nestlé believes that for a company to be successful in the long term, it should not only create value for shareholders but also for society at large. Nestlé Creating Shared Value focuses on three main areas: nutrition, water and rural development.

Nestlé Middle East focuses on nutrition, emphasizing continuous nutrition improvement of its product portfolio according to international recommendations as well as micronutrient fortification to address specific local/regional deficiencies. It also implements nutrition awareness and community initiatives, namely the Nestlé Healthy Kids Program launched in Lebanon in 2010 and soon spreading to other countries. The Program aims to raise nutrition, health and wellness awareness among school-age children, and involves interactive educational sessions implemented in collaboration with the American University of Beirut under the name “Ajyal Salima.”