Dubai, 5 May 2014:As a case study on why companies must play a key role in tackling global problems which cannot be solved by governments alone, Nestlé, the world's leading nutrition, health and wellness companyis showcasing its Nestlé Healthy Kids Program -- Ajyal Salima at the 11thCorporate Social Responsibility (CSR) Summit being held 18-21 May at The Address Hotel in Dubai Marina. 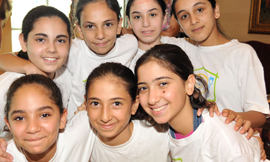 “The Program thus helps spotlight the major factors which ensure CSR initiatives make a positive impact – namely transparency on commitments and progress, measurability and evidence based results, and having the right partners and stakeholders to share responsibility on common goals,” said Lydia Fowler, Divisional Manager, Informa.

“CSV is based on the reality that the long-term economic and social challenges the world is facing - population growth, availability of resources, particularly water, food security - cannot be solved by governments alone, and corporations need to take responsibility and contribute to the solutions,” added Antoniades-Turk.

One of the company’s key CSV initiatives, the Nestlé Healthy Kids Global Program was launched globally in 2009 and runs in partnership with governments, academia, and NGOs in over 68 countries around the world reaching to date more than five million kids.

The regional “Nestlé Ajyal Salima” curriculum was developed by the American University of Beirut and involves 12 educational sessions per round, including interactive learning and hands-on activities on nutrition, healthy eating and physical activity; as well as questionnaires developed to track improvement of children from pre to post interventions.

A study, after it had been running for three years in Lebanon in collaboration with the Lebanese Ministry of Education and Higher Education, found that nine-eleven year-olds ate fruits and vegetables twice more frequently, and their general nutrition awareness increased significantly following its interventions.

The Program was later launched in the UAE in 2012 in collaboration between the Dubai Health Authority, the Dubai Education Zone, the Princess Haya Initiative for the Development of Health, Physical Education & School Sports; and Nestlé Middle East. It’s currentlyalso expanding to other countries on a regular basis.

Picture caption: The 11thCSR Summit is being held from 18 until 21 May at The Address Hotel in Dubai Marina.