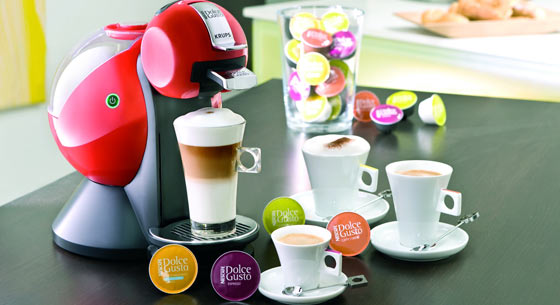 COFFEE SHOP-QUALITY AT HOME: The Nescafé Dolce Gusto system has grown phenomenally since it came to market in 2006.

Nestlé is strengthening one of its fastest growing businesses in Europe with a EUR 220 million (over CHF 265 million) investment.

The company is set to build a new Nescafé Dolce Gusto factory in Germany, the largest market for the brand worldwide.

The factory, located in Schwerin, will create 450 jobs. With 12 new production lines, it will become operational by the end of 2013.

Located about 100km from Hamburg, the biggest European port for coffee imports, the factory aims to produce about two billion coffee capsules a year for export to the rest of Germany, Eastern Europe and Scandinavia.

Nestlé made the announcement at an official ceremony at the Schwerin site.
Watch the webcast.

Erwin Sellering, German Minister for the state of Mecklenburg-Vorpommern, attended the event, along with Laurent Freixe, Nestlé’s Zone Director for Europe, and Gerhard Berssenbrügge, Chief Executive Officer of Nestlé Germany.

“This is one of our biggest investments in Europe and highlights our continuous investment in our capacity for innovation,” said Mr Freixe.

“Nescafé Dolce Gusto is the leader in the portioned coffee market in 20 countries. With a growth rate of over 50%, it is one of the fastest growing businesses for Nestlé in Europe,” he added.

This is one of our biggest investments in Europe and highlights our continuous investment in our capacity for innovation. Laurent Freixe, Nestlé Zone Director for Europe

The company’s first Nescafé Dolce Gusto factory, which opened in 2006 in Tutbury in the United Kingdom, is already running at full capacity. Last year Nestlé invested GBP 110 million in the site to triple production.

EXPANDING THE BUSINESS: With 12 production lines, the Schwerin factory aims to produce about two billion coffee capsules a year

The company also invested EUR 45 million to expand its Wagner pizza factory in the city of Otzenhausen.

“Our establishment of this new factory reflects more than just an important investment to expand our business. It illustrates deep trust in the country where we have had successful operations for over 110 years,” Mr Freixe added.

Launched in 2006 in Switzerland, Germany and the United Kingdom, Nescafé Dolce Gusto is now available in 56 countries worldwide, with 41 of these countries in Europe.

By 2013 the brand aims to generate sales of CHF 1 billion.