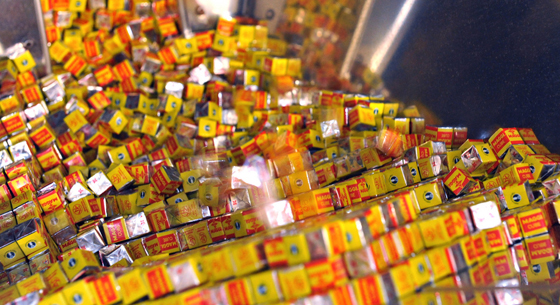 Millions of consumers across Central and West Africa will be able to increase their iron intake at low cost with a new range of fortified bouillon cubes and tablets from Nestlé.

The company is adding iron to its popular Maggi brand seasonings with the aim of helping to address one of the region’s most widespread micronutrient deficiencies.

Maggi bouillons are a staple part of many lower income consumers’ diets in Central and West Africa.

Already fortified with iodine, more than 100 million cubes and tablets were sold every day in the region in 2011.

Nestlé’s development of the iron-fortified Maggi bouillon is a continuation of its commitment to helping to reduce micronutrient deficiencies on a global scale.

Maggi bouillons can be bought in two formats - 4g cubes or 10g tablets - either individually or in packs. They are consumed in a variety of traditional dishes.

“If you look at the number of bouillon units Nestlé sells in this region every day, there is enormous potential for us to make a positive impact on local consumers’ diets,” said Maarten Geraets, Business Executive Manager for Maggi in Central and West Africa.

“The fortification of commonly consumed food products such as bouillon cubes, flour, and milk has been shown to help prevent micronutrient deficiencies. A single Maggi cube can serve two or more people,” he continued.

The company plans to roll out the new bouillon cubes across sub-Saharan Africa over the coming months, starting in Nigeria.

Iron is part of the red blood cells, specifically the protein hemoglobin, which carry oxygen through the blood. Anaemia - the state of having too little hemoglobin in the blood - is mostly caused by a lack of iron in the diet.

In some countries in Central and West Africa up to 90% of children are anaemic. In Nigeria the problem affects more than three quarters of preschool-age children.

If you look at the number of bouillon units Nestlé sells in this region every day, there is enormous potential for us to make a positive impact on local consumers’ diets. Maarten Geraets, Business Executive Manager for Maggi, Central and West Africa

Young children and pregnant women are particularly vulnerable to iron deficiency because they need higher levels of the mineral for growth.

Nestlé collaborates with scientists on a global and regional level to fortify appropriate food products according to local needs.

In Nigeria, Nestlé will support the launch of the iron-fortified Maggi cubes and tablets with communications activities to raise awareness locally about the health implications of micronutrient deficiency.

The company has produced simple educational materials such as pocket cards and fact sheets in Nigeria’s three main languages.

It will conduct a long-term evaluation of the impact of the Maggi bouillon's introduction to local consumers’ diets on their health status and quality of life.

Across Central and West Africa, Nestlé provides consumers with information to help them cook and eat nutritious food with fresh ingredients through its Maggi-branded activities in the region.