Skip to main content
Back to Press releases
Lausanne, Switzerland,Feb 26, 2015

The world’s first attempt to circumnavigate the globe in a solar powered aircraft is set for take-off next week in Abu Dhabi, and Nestlé Research is playing a crucial role in helping make the mission a success.

Solar Impulse is a pioneering aircraft which can fly long distances powered only by the sun. The two Swiss pilots who will fly the plane and challenge the boundaries of sustainable flight will be sustained by food specifically researched, developed and supplied by Nestlé. 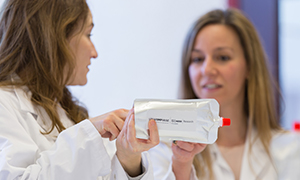 Nestlé Research has worked closely with the Solar Impulse team for over four years, developing a range of meals and snacks that can withstand extreme variations in temperature and climatic conditions, whilst providing the nutrition required. The meals are tailored to the preferences and needs of the pilots, offering them some comfort and reward on their journey.

Nestlé’s partnership with Solar Impulse is also helping to support educational activities related to sustainability, helping maximise the legacy and impact of the endeavour being undertaken by Solar pilots Bertrand Piccard, Initiator and Chairman of Solar Impulse and André Borschberg, Co-founder and CEO.

"Working with the Solar Impulse team over the last four years has been an immensely rewarding experience" said Nestlé research scientist Dr Amira Kassis "Nestlé Research has developed food that must withstand extreme conditions and provide the right levels of nutrition. Success relies on using the right packaging, ensuring the right supplies are in the right place and providing the pilots with something they can enjoy on their adventure". 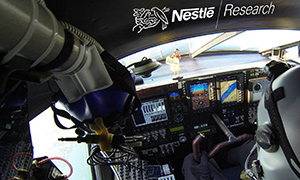 Dr Kassis will follow the plane over the coming months, managing the diet and nutrition of the pilots and ensuring that the correct amounts of food are available. The flight is expected to take around five months, consisting of multiple stop-overs in locations including China, India and the United States, spanning 35,000 kilometers and some 500 hours of actual flying time.

Commenting on the role of nutrition in helping the initiative achieve its aims, pilots Bertrand Piccard and André Borschberg said: "The right food and nutrition are critical to the success of our mission, sustaining us for the long journey around the earth. We have benefited from the scientific expertise and experience of the scientists at Nestlé Research who have developed meals specially tailored for us. By working closely with the team, we also know that we’ll enjoy meal times – providing some comfort in such an extreme environment."

Nestlé will be providing all of the meals on board in specially designed packaging. Supplies will also include Nestlé bottled water and NESCAFE coffee for the pilots.

Swiss pioneers Bertrand Piccard (Chairman) and André Borschberg (CEO) are the founders, pilots and driving force behind Solar Impulse, the first aircraft able to fly day and night without a drop of fuel – propelled solely by the sun’s energy. With the Si2 aircraft, they will attempt the first Round-The-World Solar Flight in 2015. Supported by Main Partners Solvay, Omega, Schindler, ABB, and Official Partners Google, Altran, Bayer MaterialScience, Swiss Re Corporate Solutions, Swisscom and Moët Hennessy, this historic first aims at demonstrating that clean technologies can achieve the impossible.

After the original Solar Impulse Si1 prototype which holds 8 world records, Si2 engineers have designed and constructed a new single-seater aircraft made of carbon fiber. It has a 72 meter wingspan (larger than that of the Boeing 747) for a weight of just 2,300 kg, equivalent to that of a car. The 17,248 solar cells built into the wing supply electric motors (17.5 CV each) with renewable energy. The solar cells recharge four lithium batteries totaling 633 kg each, which allow the aircraft to fly at night and therefore have virtually unlimited autonomy.

The Si2 Round-The-World flight will take-off from the Abu Dhabi (UAE), in early March and return by late July 2015. The route includes stops in Muscat, Oman; Ahmedabad and Varanasi, India; Mandalay, Myanmar; and Chongqing and Nanjing, China. After crossing the Pacific Ocean via Hawaii, Si2 will fly across the U.S.A. stopping in Phoenix, the Midwest, and New York City at JFK. After crossing the Atlantic Ocean, the final legs include a stop-over in Southern Europe or North Africa before completing the Round-The-World flight at its final destination in Abu Dhabi.

You can download information, photographs and B-roll footage in the press section of the Solar Impulse website: