On-going training programme once again graduates young Saudis in line with Government directives that prioritise education and employment opportunities as a driver for diversifying the Saudi Economy.

Jeddah, December 3, 2014: This year Nestlé Saudi Arabia is celebrating the third successful year of the Nestlé Centre of Excellence in Saudi Arabia. The Nestlé training programs for 2013 and 2014 graduated 56 students in five batches, 40% of whom were offered employment at Nestlé in newly created positions. The graduation ceremony was held in the Park Hyatt Hotel, with the attendance of Government dignitaries, Universities, NGO’s, media and families of the graduates. 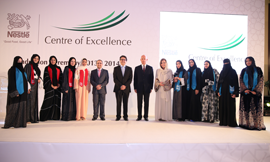 Remy Ejel, Country Manager of Nestlé Saudi Arabia commented: “When we established the scheme over three years ago we said, ‘A promise made should be a promise kept’. This year’s graduation confirms that promise once again.”

Yves Manghardt, Chairman and CEO of Nestlé Middle East stated that “The Center of Excellence that we started in 2012 in Saudi is the pioneer in the region and its success has encouraged us to expand it to Oman, where we launched it in September, 2014, as a first step of roll out to other countries in the region as well.”

“Nestlé believes in Creating Shared Value as a fundamental part of our way of doing business. It’s based on the reality that the long-term economic, social and nutrition challenges the world is facing cannot be solved by governments alone, and corporations have a role to play and contribute to the solutions.” Manghardt added.

Three years after its inception the Centre has trained a total of 77 students as per the following breakdown:

Nestlé’s initiative will not only help graduates gain employment within Nestlé, but it will also give them the tools and the means to find work elsewhere within Saudi Arabia. The programme ensures a continuous flow of local talent to the organization and contributes to the development and training of external Saudi graduates by allowing them to benefit from the Nestlé expertise.

Ejel concluded that “while 40 percent of the 2013/14 graduates were offered employment at Nestlé in newly created positions, the others will no doubt excel wherever they pursue their careers.”

With this training programme, Nestlé Saudi Arabia is working hand in hand with the vision of Saudi Arabia to diversify the economy and ensure the Kingdom’s competitive edge on the world stage is maintained for future generations.

Notes to the Editor: